Took a group of riders down to the Southland New Year Carnival where we ran track training sessions in conjunction with two nights of good hard racing.

Elite NZ Track Nationals was a huge success. I was Canterbury Team Manager and also coach for the Sprint Team and U19 Women's Teams Pursuit. Results from the crew were awesome...

Outstanding performance from Max to place 4th in the U19 Men's Points Race. Maddi improved her 3000m IP by 9 seconds from last year and her 500m TT by 3 seconds!

Canterbury Track Champs was a huge success with many notable performances from the group including a clean sweep of the Titles for Olivia Podmore and Christine Lambley. Max Beckert won the Open Points Race as an U19! 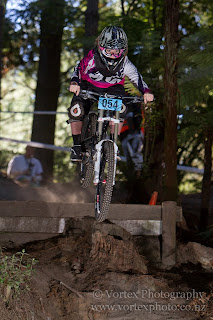 Age Group Track Nationals was again outstanding and we saw numerous riders step on to the podium and step up with their personal performances...

Outstanding rides from Max Beckert who won the Points Race round of the U19 Omnium lapping the field with Reon Sheath, Rhys Jones whose improvements over the year have been fantastic, Josh Smith who rode an excellent 2:28 in the U17b IP as a first year and Phoebe McCaughan who was the only other Cantab (from 6) to join Olivia in the U17g Scratch Race final.


Tour of Canterbury was a great success with Sam Horgan defending his title from last year. Maddi Campbell stepped up to win the Woman's grade.

Canterbury Road Champs took place over two weekends this year and the crew were in fine form with Alice Bennett, Maddi Campbell, Olivia Podmore, Josh Smith and Christine Lambley (making it a clean sweep of Canterbury U15 Girls Titles) all winning Gold Medals.

At the Te Awamutu Tour for Juniors Maddi Campbell and Max Beckert both won stages. Max was unfortunate to have a mechanical in stage 1 and Alice Bennett crashed hard in stage 1. Maddi finished 2nd on GC in U19 Women, Alice 5th, Lachie McGregor was 5th in U17 Boys and Josh Smith 10th and Kate Ward was 4th in U15 Girls.


Posted by Hamish Ferguson at 11:37 No comments:

Looking at the performances at TA Tour I am very satisfied with the Coaching Process we used going into this event. Two years ago when preparing riders (inc Max Beckert) for the Tour of Canberra we did lots of group efforts. Last year we included group efforts but they had less structure and people just a rep target rather than a target for each individual effort.

This year I made each rep a target (as I did on track for each effort for Olivia Podmore and Sam Buckner and others whose times improved out of sight) by running the reps as a small handicap race. From the riders with Power meters I could see the progress they were making and if they were going backwards that they needed a break or some easy days. Riders with Garmins also provided useful data with their times on a set course.

Two years ago at a High Performance Coaching course run by BikeNZ we learnt about Coach Led Racing and I feel the structure of the efforts embodies those principles whether it is in a training session, structuring a track racing session/season or advising riders how to race as I gave the crew very specific instructions on how to attack, when to attack and depending on where they were in the race how hard to attack.

The other useful input was the racing. Last year I felt the Tour of Canterbury was a pivotal event in the build up to TA and this year it proved again that this race gave riders an advantage in their build up. Even if it comes right after Age Group and Omnium Track Nationals it is an important event to race.

Most important is the riders who went to TA were very focused and collaborated with me. For many like Maddi and Alice (who made the biggest improvements in performance from 2012 who were in contact almost daily refining their riding and preparation for the race. Reminds me of 1995 when I was preparing Ewan MacMaster for his 3 month build up to World Champs in Colombia and we would be on the phone (no text, skype or Internet Cafes back then) up to 3 times a day.


Posted by Hamish Ferguson at 10:59 No comments: