Harri Rajaniemi headed from Finland to Wales to compete in the 750m TT and Match Sprint in the 40-44 age group.

The TT was not ideal as he false started and was 500m into his ride before Commissaire's signalled him to stop. He only had one heat before his re-ride.

It was his first competition at this level and sprint competition on an indoor track so given us lots to work on for World Masters Track Cycling Champs in early October. 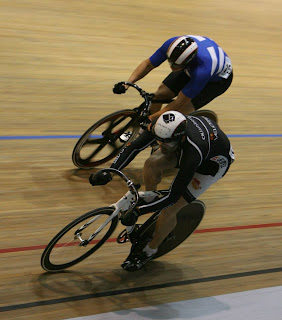 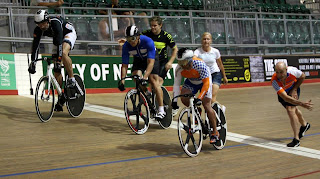 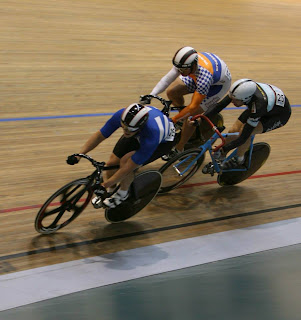 Posted by Hamish Ferguson at 15:28 No comments:

Round 5 of the Benchmark Homes Elite Cycling Series was held in Queenstown on the course used for Club Nationals and last years Oceania Champs. A cool crisp morning turned into fine day which highlighted the amazing scenery. The racers all came to put on a show and early aggression paid off in all races. 4th place for Sam Horgan was sufficient to put him in the Elite series overall lead. Hopefully his Team Budget Forklifts commitments will allow him to ride the final round to seal the win. Lucy Timmings completed her first Benchmark race and was the first U19 woman to finish.

Check out rickoshayphotos excellent pics of the event!


Posted by Hamish Ferguson at 15:20 No comments:

Flight delays in Sydney withstanding Maddi is on her way to Italy to compete in the World Road Cycling Championships riding the U19 Women's Time Trial and Road Race. The TT is on a dead flat course while the road race course has been described as the hilliest course in history featuring a 4.5km climb that the U19 women ride 5 times and a 600m that ramps up to 16% gradient as it goes over the top.

Naturally we have been hitting the hills pretty hard looking for more power and power sustained over several efforts to prepare her for the unrelenting ascents she will face in Tuscany!


Posted by Hamish Ferguson at 15:02 No comments:

A weekend of great racing on the roads of Timaru was in store for riders from U17 to Open Riders.

Maddi Campbell took an excellent win in the U19 Women's grade from Alice Bennett. Holly Edmondston won the 1st stage and Maddi won the final 3 stages including a solo victory after going clear up the tough Taiko climb. Olivia Podmore was in hot form sprinting to U17 Girls wins in stages 1, 2 and 4.


Posted by Hamish Ferguson at 14:37 No comments:

Blenheim Schools Tour is always a fun weekend of racing for School Age riders. It is raced over varying and challenging courses. The crew as always were they with their young Game Faces on and delivered some excellent results...


Posted by Hamish Ferguson at 14:26 No comments: